Join the VIP Club for $20 Off Your First Order 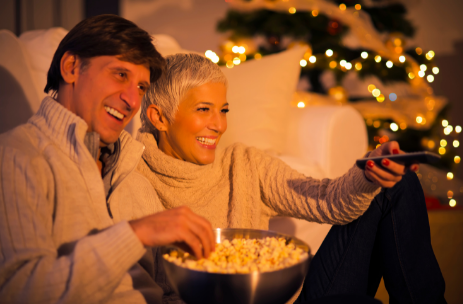 The snow has started and Christmas is just around the corner. It’s time to spike the eggnog, and snuggle up in front of the telly to watch all of your favourite Christmas movies. There’s only one problem- you don’t know where to find all of your favourite Christmas movies anymore since DVDs are increasingly rare and you don’t know any reliable hoarders. Well, not to worry, because we are here to tell you just where you can find all of the holiday classics that you know and love.

Get ready to embrace the spirit of the season with all the greatest holiday movies ever made.

Netflix now has a massive selection of Christmas movies, and is now putting out their own original Christmas movies!  If you have a Samsung Smart TV you will already know how easy it is to access your favourite streaming services right off the home menu!

Always in the running for the best Christmas movie, Love Actually follows the lives of eight very different couples in dealing with their love lives in various loosely interrelated tales all set during a frantic month before Christmas in London, England. Who doesn’t love Hugh Grant? Be sure to check this one out if you haven’t seen it.

Starring Jimmy O Yang (Of Silicon Valley fame) Love Hard is the story of an LA girl, unlucky in love, falls for an East Coast guy on a dating app and decides to surprise him for the holidays, only to discover that she’s been catfished.

How The Grinch Stole Christmas

A modern-ish take on the beloved Dr. Seuss story of the same name. Jim Carrey uses the full force of that rubber face of his to make the Grinch come to life in this hilarious and moving holiday special-effects spectacular.

Taking its cue from the internet meme of making horrible looking sculpture cakes and claiming victory, Nailed It puts a holiday spin on the game by challenging contestants to make yuletide creations… badly.

Father Christmas is Back

Elizabeth Hurley, Kelsey Grammar, John Cleese, that alone is enough reason to check this one out. Father Christmas is Back centres around four sisters who have re-united for the Christmas Holiday in a Yorkshire mansion. misunderstandings that uncover the long-buried secret that tore their family apart, so many years ago.

You enjoyed him as Snake Pliskin in Escape From New York, and as a doomed Arctic explorer in The Thing. Now, Kurt Russell is finally old enough to play Santa Clause in this Netflix-exclusive Christmas action-adventure.

If you’ve got a weakness for British Royalty, and cheesy Hallmark style Christmas movies, you might want to check out this fun and frolicking romantic Christmas comedy from the director of Inspector Gadget 2 and Woody Woodpecker.

Christmas Movies on Disney Plus

Disney Plus may be new to the feature film scene- but you can be sure this family-classic franchise wouldn’t break into the streaming movie market without having a few Christmas movies in a big red bag.

An irreverent take on Christmas lore as Santa’s job is passed on to a younger member of the Kringle family. Enjoy Bill Hader and Anna Kendrick as they break all the figgy rules.

It wouldn’t be Christmas without Macaulay Culkin booby-trapping his entire house to defend it from burglars in Home Alone 1 & 2… but not Home Alone 3 because it is an abomination that should never be watched by anyone, and don’t get us started on the modern reboot.

The Nightmare Before Christmas

Who could get through the holidays without the jangling bones of Jack Skellington in Tim Burton’s stylish and strange The Nightmare Before Christmas? Not you, certainly.

A modern take on the timeless Christmas classic with none other than Jim Carrey as the irascible Ebenezer Scrooge. Will he change his tune, in the end, this time? Probably.

Tim Allen of Home Improvement fame tries his hand at portraying old Saint Nick in this hilarious take on the myth of Santa. Will he grunt like an ape as he attempts to fill Santa’s shoes? Yes. Yes, he will.

Another timeless classic that’s sure to warm your heart as it imparts both wisdom and the true spirit of the holiday.

Home to great shows like The Wire, and The Sopranos, Crave TV also has a great selection of modern and classic Christmas movies.

Apparently, there’s a law that every movie streaming service in North America has to have Miracle on 34th St. It is a law that is both fair and just.

If you want to get your A Christmas Carol boxes checked off, you have to go to Crave TV, because they are the only service that has the 1951 original, the 1984 remake, and the more recent animated version.

Jingle All The Way

If you love the holidays, and you love making fun of Arnold Schwarzenegger’s voice- then you cannot pass up Jingle All The Way. Will Arnold’s muscles give him the edge he needs to get his hands on the season’s last Turbo Man action figure? Get to the chopper.

Amid failed lives of crime, addiction, and loneliness, Harold and Kumar embark on a hilarious quest to replace a destroyed Christmas tree. Maybe this time they can stay out of prison.

Billy Bob Thorton’s raunchy holiday classic. A miserable conman and his partner pose as Santa and his Little Helper to rob department stores on Christmas Eve. But they run into problems when the conman befriends a troubled kid. Definitely watch after the kids have gone to bed.

If you Google search “Yippee Ki Yay” the first result you get is this movie. That’s because Die Hard is the best Christmas movie ever made.

If you like the Hallmark Christmas made for TV movies, than Prime Video is the streaming service for you! They have tons of them, but also, some great classics.

Take a good long look at the biggest elf on the shelf this year as Will Farrell of Saturday Night Live fame turns on the funny in this irreverent, yet good-hearted Christmas comedy.

If you like a little Rocket Sauce in your holiday, try The Holiday with comedian rocker Jack Black and Kate Winslet as they put a rom-com spin on Christmas.

It’s the timeless tale of a very special gift and a child’s dream as dance and art combine to weave one of the most iconic Christmas stories ever told.

If Ebenezer Scrooge didn’t quite come through in black and white, try him in full colour in this touched up version of the old classic.

Enjoy the country legend, Dolly Parton, in her unforgettable role as a sassy lounge singer who turns things around in the least expected way possible in this classic from 1996.

Did We Miss Any Of Your Favourites? Or Did You Find Other Hidden Gems? Let Us Know In The Comments Below!

We Are Canada’s Local EXPERTS For Consumer Electronics Since 1981!

From its humble beginning, renting video cassettes from the second bedroom of the founders apartment, Audio Video Unlimited grew to a 5 store chain, servicing the Greater Vancouver marketplace.

Find the perfect gift for all on your list. View our Holiday Gift guide to find everything from stocking stuffers to the biggest box under the tree.
View Gift Ideas